Offset banking involves a public or private entity investing in a project that has the effect of substantially reducing a targeted pollutant(s), such as sediment runoff, phosphorus, heavy metals, etc. This project is referred to as "the bank." The entity creating the bank receives "credits" for the associated reduction in pollutants, which it can then sell to publically-owned treatment works (POTWs) or other point source polluters facing high costs of meeting discharge standards. Trades can be allowed on a 1-to-1 basis: the buyer obtains one credit for each creditequivalent increase in pollution associated with his/her activities; or higher trading ratios can be required, e.g., 3:1, where the buyer must acquire (in this example) three credits for each creditequivalent increase in pollution associated with his/her activities. In this latter case trades result in actual environmental improvements.

This paper addresses two major issues. The first refers to the steps required to establish a pilot project for one or more offset banking projects in Georgia. These steps are: identifying entities with incentives to purchase offset credits; identifying one or more entities that might establish a bank, and potential bank sites; establishing trading rules with appropriate local water quality management authorities; and obtaining approval of the proposed trading program from the U.S. EPA.

The second major issue addressed in the paper is means by which an offset bank might be created. For this purpose, a brief survey is offered of existing water quality trading projects in the U.S.. Buyers of offset credits are virtually always point-source polluters (POTWs or industries). Point and non-point projects have been used as "banks" -- as a source for offset banking credits. Attention in this paper is focused on non-point sources that might serve as banks for pilot offset banking projects in Georgia. Both low- and high-technology alternatives that might be used for such projects are discussed.

Notwithstanding incentive-related limitations on the number of point source polluters that might constitute the "demand" for offset credits discussed in section II, the authors have identified one entity (Fulton County) that may represent significant demand for credits, and they expect to identify others. Moreover, the authors argue that continued growth in Georgia, particularly in the Atlanta and Coastal areas of the State, will give rise to sufficient numbers of point source entities seeking new discharge permits to warrant interest in offset banking as a means of meeting increasingly stringent discharge restrictions at minimum cost. If or when enforcement of TMDLs gains strength in the State, needs for systems like offset banking will increase accordingly. These considerations, and the associated benefits to Georgians that might attend the establishment of offset banking programs in the State, serve as the rationale for the author's continued interest in exploring means by which pilot offset banking projects can be established in Georgia. Working Paper # 2003-002 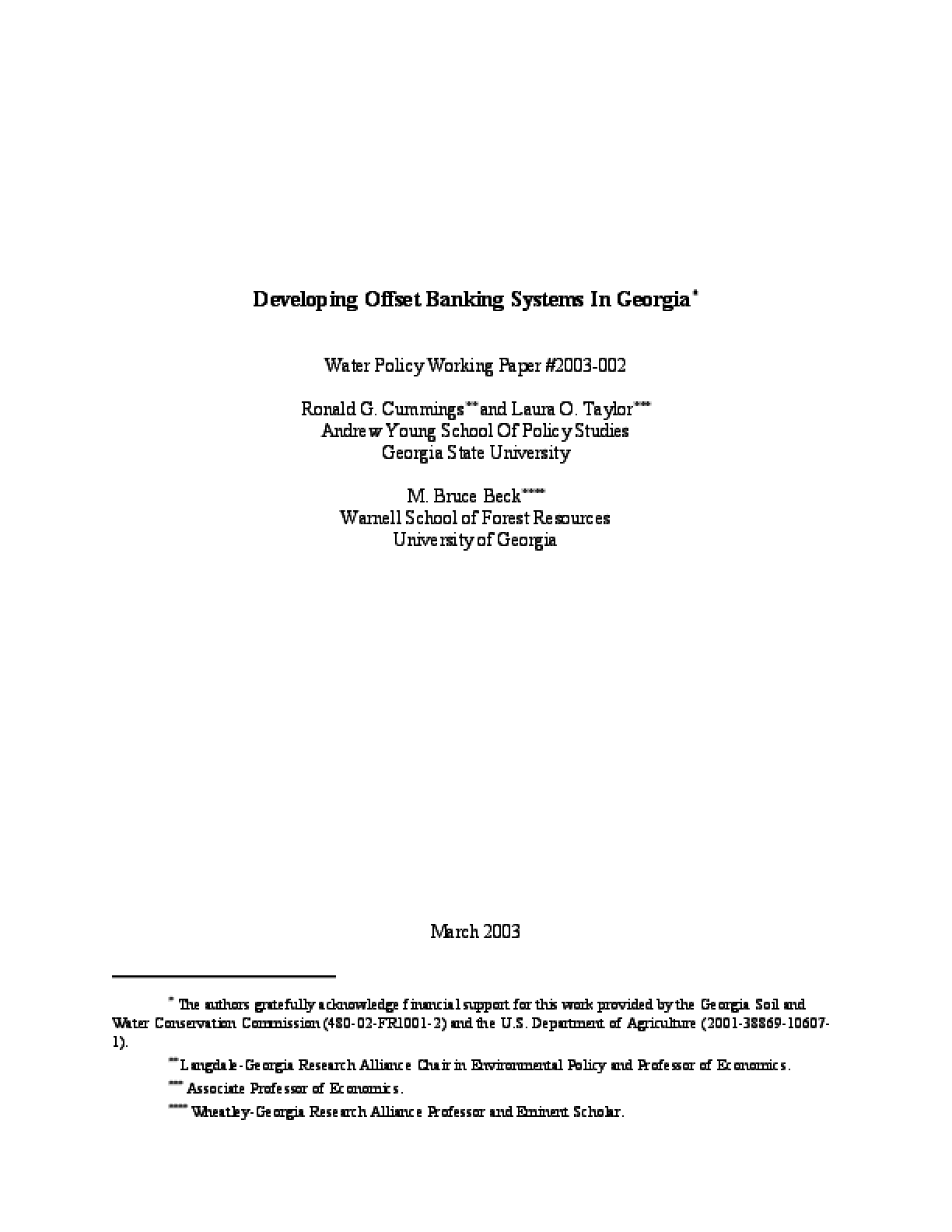