New York City is home to over three million foreign-born residents. Yet, immigrant New Yorkers have been forced to struggle with the harsh realities of Immigration and Customs Enforcement ("ICE") operations in their city for years -- families broken apart by midnight raids, parents of U.S. citizen children sent to far-away detention facilities in Texas and Louisiana and held without bond, immigrants arrested after a "stop-and-frisk" encounter with the NYPD, only to find themselves thrown into a pipeline that sends thousands of New Yorkers from Rikers Island to ICE detention every year. However, even as advocates, the City Council, and other city stakeholders debate how to limit the damage that ICE policies inflict on New York and the city's large immigrant community, there has been little data on what exactly happens to immigrant New Yorkers who are apprehended by ICE, and the extent of the agency's enforcement operations in the city.

In response to this urgent need for information, the community groups Families for Freedom and the Immigrant Defense Project filed a request for information with ICE under the Freedom of Information Act ("FOIA"). The agency initially did not comply with the request, instead stating that the organizations needed to pay over $1.3 million in fees to secure the necessary documents. The organizations filed a lawsuit in federal district court against ICE, and the case was settled in May of 2011. As a condition of the settlement, ICE provided data to the Vera Institute for Justice, for use in conjunction with immigration court data for a wide-ranging study on immigrant New Yorkers' access to counsel. That study was released in early 2012. ICE also provided a spreadsheet of data on every individual apprehended by the New York City Field Office from October 2005 through December 2010. Nineteen distinct data fields were included for each individual apprehended, and that never before released data is the subject of this report.

The data provided by ICE, as a condition of the settlement of the lawsuit, is significant in two key ways. First, it allowed researchers at the Vera Institute to accurately assess the impact of detention and, in particular, ICE's transfer policy, on the issues that face immigrant New Yorkers in immigration court, such as access to legal counsel and the availability of relief from deportation. Second, the spreadsheet provided by ICE that is the basis of this report provides hard evidence of the effects of immigration detention and deportation on New York City communities. For example, there had previously been no way for local leaders and community members to assess how many individuals of a certain nationality were detained by ICE in New York or how many individuals in a given New York City zip code or neighborhood were detained. Likewise, there was no way for them to know how many parents of U.S. citizen children were swept into the system. Other issues, like the frequency of bond settings for New Yorkers and ICE transfers of New Yorkers to far-away detention facilities, remained equally murky. However, while the data is in many respects new, it only confirms what groups like Families for Freedom and the Immigrant Defense Project have known for years: that ICE enforcement in New York City is terrorizing the city's immigrant community. 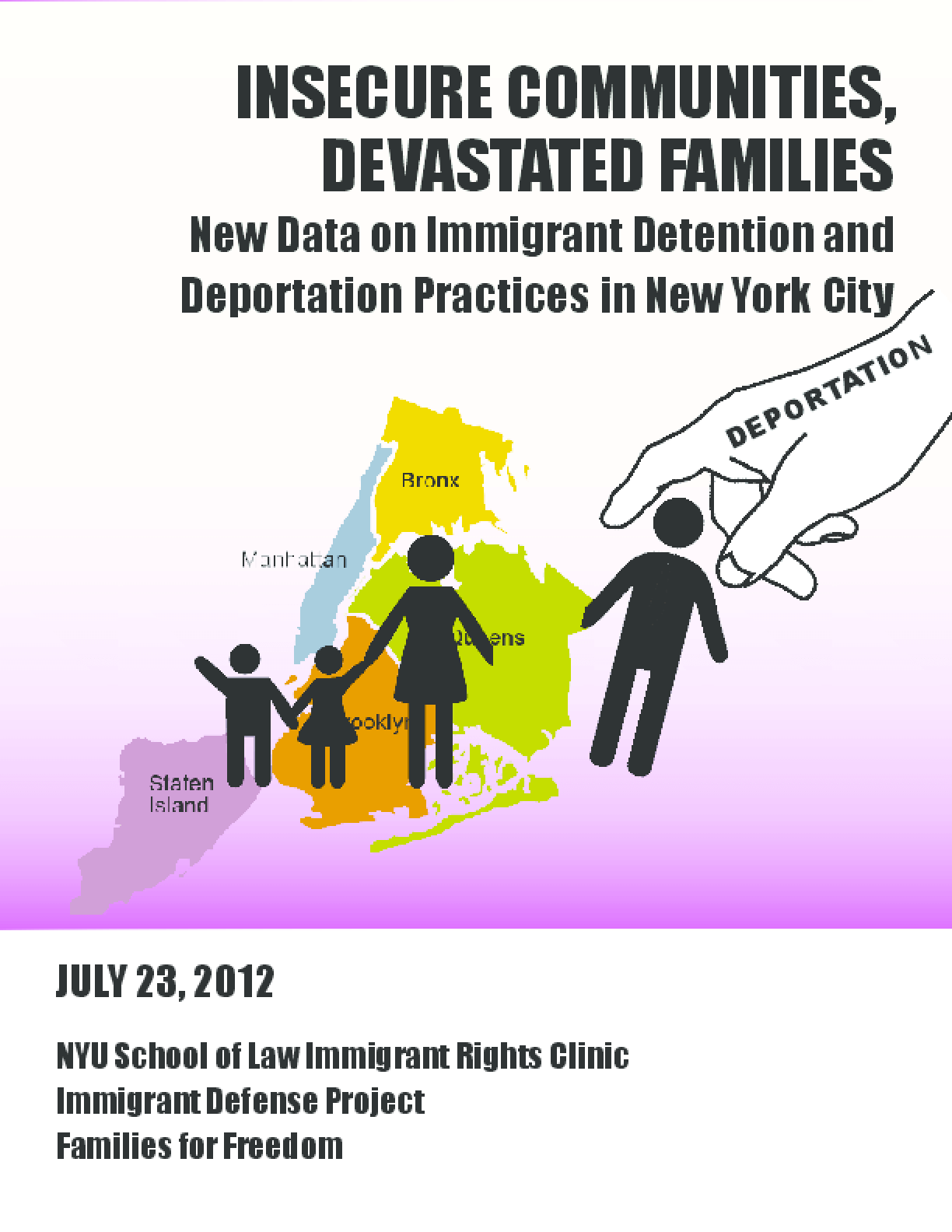