In the summer of 2006 the forum took a different turn. It is clear there is a revolution affecting every media business, every consumer or user of media, and every institution affected by media. In a word, everyone. FOCAS sought to define the paradigm changes underway in the media, and to identify some of the significant repercussions of those changes on society.

"Next Generation Media" was a three-day meeting among leaders from new media (e.g., Google, craigslist, and Second Life) and mainstream media (e.g., The New York Times and Time), from business, government, academia and the non-profit sector, all seeking a broad picture of where the digital revolution is taking us.

This report of the meeting, concisely and deftly written by Richard Adler, a longtime consultant in the field, weaves insights and anecdotes from the roundtable into a coherent document supplemented with his own research and data to form an accessible, coherent treatment of this very topical subject.

The specific goals of the 2006 forum were to examine the profound changes ahead for the media industries, advertisers, consumers and users in the new attention economy; to understand how the development and delivery of content are creating new business models for commercial and non-commercial media; and to assess the impact of these developments on global relations, citizenship and leadership.

The report thus examines the growth of the Internet and its effect on a rapidly changing topic: the impact of new media on politics, business, society, culture, and governments the world over. The report also sheds light on how traditional media will need to adapt to face the competition of the next generation media.

Beginning, as the Forum did, with data from Jeff Cole's Center for the Digital Future at the University of Southern California, Adler documents the increasing popularity of the Internet for information, entertainment and communication. Users are increasingly generating and contributing content to the web and connecting to social networks. They are posting comments, uploading pictures, sharing videos, blogging and vlogging, chatting through instant messages or voice over Internet (VoIP), or emailing friends, business colleagues, neighbors and even strangers. As Cole observes, "Traditional media informed people but didn't empower them." New media do.

The report describes three of the Internet's most successful ventures -- Wikipedia, Second Life, and craigslist. Wikipedia is a prime example of how an Internet platform allows its users to generate content and consume it. As a result of "wiki" software technology anyone can contribute or edit existing information free of cost. Second Life, a virtual world, sells virtual real estate where subscribers, in avatar form, can conduct conversations, go to lectures, even create a business. Craigslist, a predominantly free online classified site with listings in every major city in the United States, has become so popular that it is posing a significant threat to newspapers as it competes with their classified ad revenues.

As a result of these and other new media phenomena, not the least being Google and Yahoo, print publications are wrestling with new business models that could entail fundamentally restructuring the way they operate. For instance, reporters are now expected to report a story on multiple media platforms and discuss them online with readers. Newspaper publisher Gannett is exploring the incorporation of usergenerated news or "citizen-journalism" into its news pages.

In an era of abundant choices marketers have an even greater challenge to figure out how best to appeal to consumers. The report explores how marketers, e.g., of Hollywood movies or pomegranate juice, are moving from traditional or mainstream media to viral and other marketing techniques.

For much of the world, the mobile phone rather than the computer is the most important communications device. Users depend on their phones to send and receive messages, pictures, and download information rather than just talk. In developing countries mobile phones are having an exceptional impact, penetrating regions which are not being serviced by land lines. Thus we are seeing new uses daily for this increased connectivity, from reporting election results in emerging democracies to opposing authoritarian governments in order to bring about new democracies.

Meanwhile, the report discusses the need for the United States to develop a new form of public diplomacy rather than the traditional top-down approach to communicating to foreign citizens. This topic has been a recurring theme at FOCAS conferences the past few years, this year calling for more citizen diplomacy -- that is, more person-toperson contact across borders through uses of the new media. Indeed, Peter Hirshberg suggested that American leaders should listen more to the outside world to effectively manage what he called "Brand America."

Finally, after acknowledging the detrimental effects that new technologies can bring about, the report discusses what role those technologies could play in expanding freedom and opportunity for the next generation. As a conclusion, FOCAS co-chair Marc Nathanson proposed adding a ninth goal to the United Nations Millennium Goals, namely, "to provide access to appropriate new technologies." 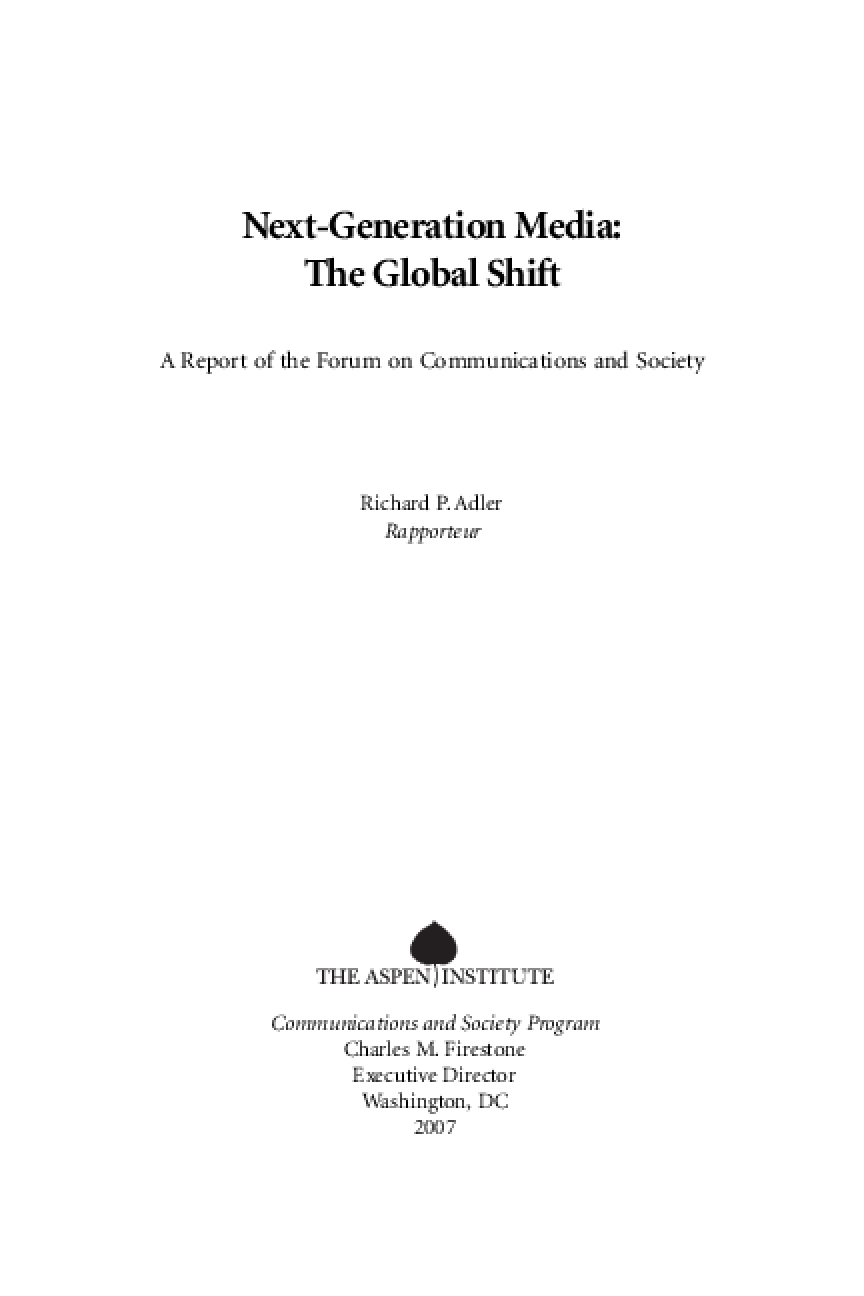