Nearly 30 years ago, President Ronald Reagan proclaimed in his first inaugural address, "[G]overnment is not the solution to our problem; government is the problem." Those words unleashed a sustained agenda of deregulation and relaxation of regulatory enforcement.

Increasingly, unscrupulous companies have been able to cut corners when it comes to issues such as environmental protection, worker safety, and consumer safeguards. In 2010, two such events captured national headlines. On April 5, an explosion at Massey Energy's Upper Big Branch mine killed 29 miners, the worst mining accident in 40 years. On April 20, 11 people died and 17 others were injured when BP's Deepwater Horizon rig exploded and spilled at least 185 million gallons of oil into the Gulf of Mexico, causing extensive damage to marine habitats, as well as the Gulf's fishing and tourism industries. While no one will ever know if a stronger regulatory enforcement system would have prevented these disasters, it is certain that the cozy relationship between government enforcer and business contributed to the problem.

President Barack Obama took office acknowledging weaknesses in regulation and arguing that special interests had taken control of the process. This report assesses whether the Obama administration has made progress in reinvigorating regulatory enforcement at the federal level. It covers health, safety, and environmental enforcement at federal agencies from January 2009 to October 2010.

This is the second of three OMB Watch reports evaluating the Obama administration's record on regulatory issues. The first report, released in September 2010, focused on rulemaking and will be occasionally referred to in this report. The third report will focus on the regulatory process, including issues of transparency, participation, regulatory analysis, and scientific integrity, and will more deeply examine the role of the White House, specifically the Office of Management and Budget (OMB), in shaping the administration's record. The third report will be released in the coming weeks.

This report focuses on three areas: worker safety and health, consumer safety and health, and environmental enforcement. The main regulatory agencies covered are the Occupational Safety and Health Administration (OSHA), the Mine Safety and Health Administration (MSHA), FDA, CPSC, the National Highway Traffic Safety Administration (NHTSA), and the U.S. Environmental Protection Agency (EPA). The report also touches upon other departments and agencies to the extent that their rulemaking activity has shaped the administration's record, including the Food Safety and Inspection Service in the Department of Agriculture, the Federal Trade Commission, and the Department of the Interior.

Each of the report's three sections begins with introductory remarks, followed by a detailed analysis of agency actions. The report includes various metrics of enforcement activity, such as numbers of inspections, numbers of violations, and amounts of penalties. The data can serve as a useful baseline for comparisons within or between administrations. However, because of the variety of metrics available, the potential variability among them, and the difficulty of determining the usefulness or virtue of the actions taken, the statistical evidence should be considered only a small component of an evaluation of agency performance. 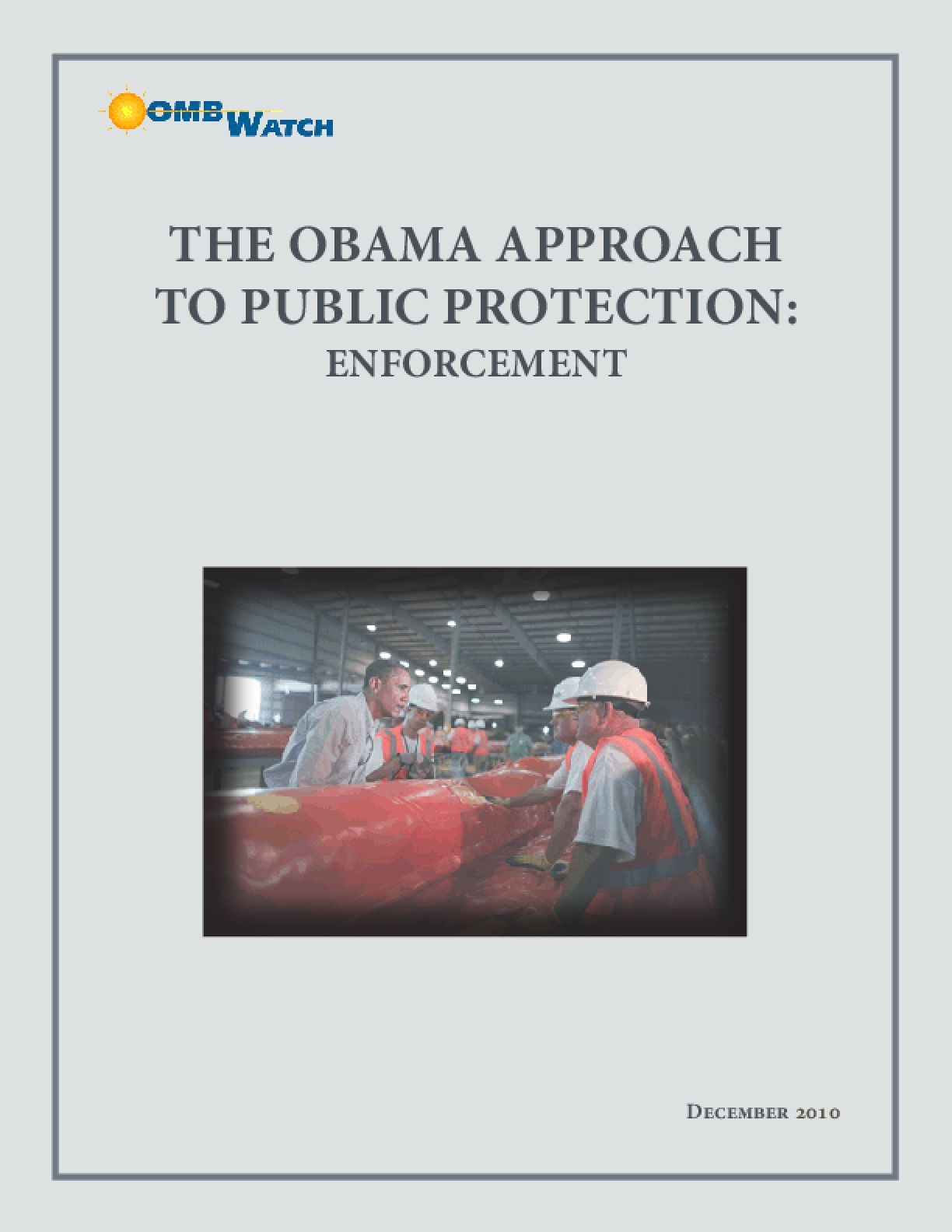