The U.S. Gulf Coast is endowed with exceptional natural beauty and ecological diversity, including wetlands, waters, beaches, forests, and all the wildlife that inhabit them. Wildlife tourism constitutes a major regional "industry." Each year, wildlife watching, recreational fishing, and hunting draw 20 million participants annually in the five states of Alabama, Florida, Louisiana, Mississippi, and Texas. The wildlife tourism industry consists not only of wildlife guide and outfitter businesses that directly serve wildlife tourists, but also the lodging and dining establishments where they eat and sleep.


Wildlife tourism depends on healthy ecosystems, which are the region's "natural capital." However, the future health and productivity of these ecosystems are in peril, in part due to natural events, such as storms, but also because human activities have altered the natural hydrology and halted natural processes, leading to severe land loss and a decrease in the health of the region's estuaries.


For example, one of the most significant and far-reaching alterations is the channelization of the Mississippi River within its delta. This deltaic system has historically played a key role in the ecologic and economic well-being of the Northern Gulf of Mexico. While the channelization of the river by an extensive levee system has benefitted commerce, ports, and communities, this way of managing the river has all but stopped the natural deltaic processes that once built and maintained the regions wetlands and barrier islands. Dredging and construction of a vast network of canals and pipelines for the oil and gas industry have also caused considerable damage to the wetlands and wildlife. These human alterations, combined with natural processes, such as wetlands subsidence, extreme weather and sea-level rise, have led to a loss of nearly 1,900 square miles of land since 1932. Large-scale land loss and decrease in water quality throughout the Gulf threatens wildlife, habitats and the tourism activities they make possible. Without bold action, the Gulf Coast economy risks losing billions of dollars in revenue.


In 2012, Congress passed the RESTORE Act, legislation mandating that 80% of Clean Water Act fines from the 2010 Deepwater Horizon oil spill go to the five Gulf Coast states to restore the ecosystem and economy. Supplementing the RESTORE Act funds, Gulf states are expected to receive significant new revenues from settlement of BP's criminal liability for the oil spill (administered by the National Fish and Wildlife Foundation), and from payments for damages from the spill under NRDA (the federal Natural Resource Damage Assessment process). Combined, these new revenue sources provide an unprecedented opportunity to reverse decades of harm to the Gulf Coast and to begin restoring the environment to a healthy and resilient condition.Because a healthy ecosystem is at the heart of the region's economy, restoring the Gulf ecosystem is the best way to help the region economically. Owners of wildlife tourism businesses who were interviewed for this study clearly indicated what is at stake for their industry; where ecosystems can no longer support wildlife, visitors have no reason to come. This suggests the urgency of restoring ecosystems to avoid losing a key part of the economy. Funds from the RESTORE Act and other legal settlements provide an unprecedented opportunity to protect not only the coastal environment but also one of the region's most important economic drivers. 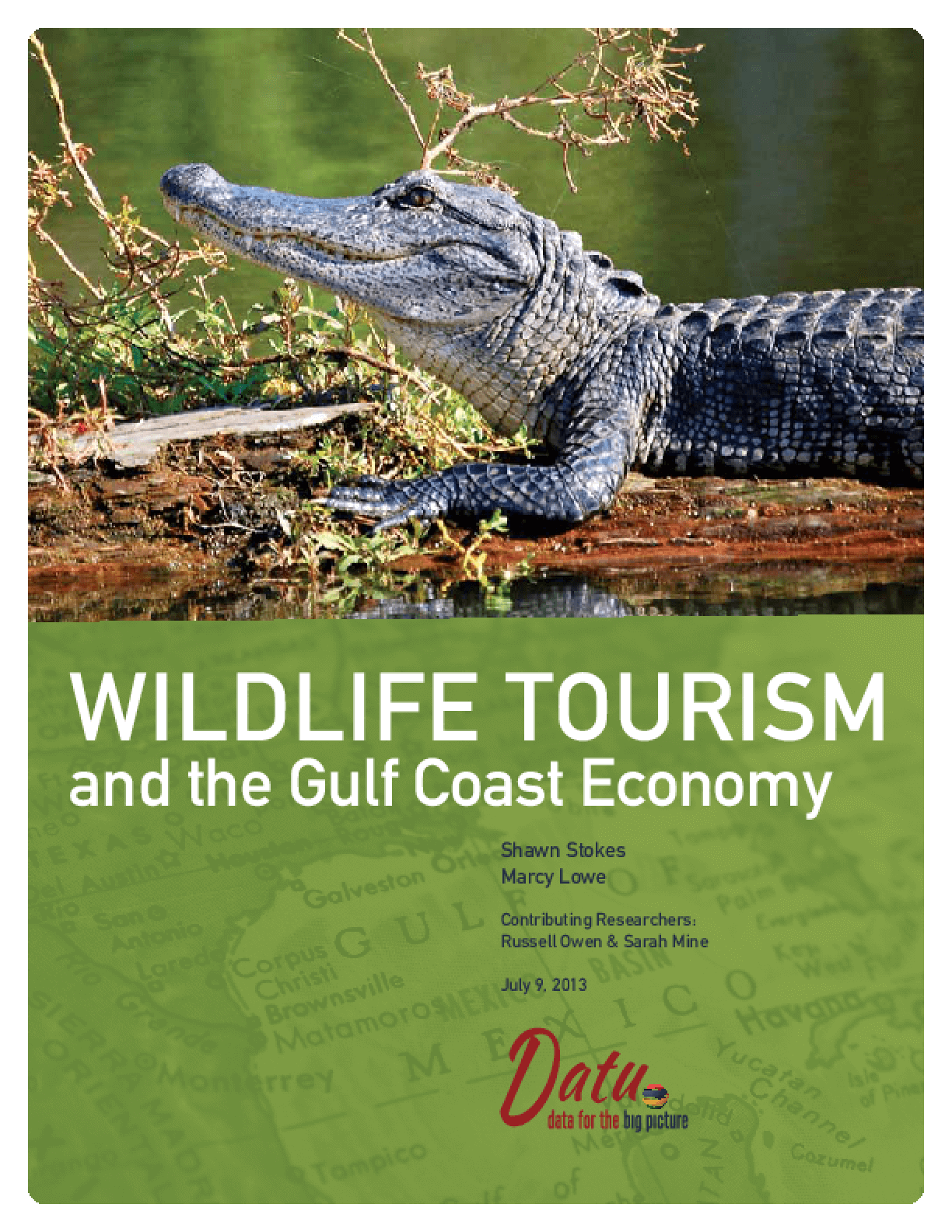